There may not be a more recognized name within the Back Cove Yachts family than that of Guy Seiders. Guy has worked tirelessly throughout his career assisting our dealers and owners in his role as our Customer Service Representative. Until recently, Guy had independently managed the warranty and after sales needs of our owners and dealers, which included well over 800 boats berthed throughout the US, Australia, Canada, and numerous other locales around the globe. 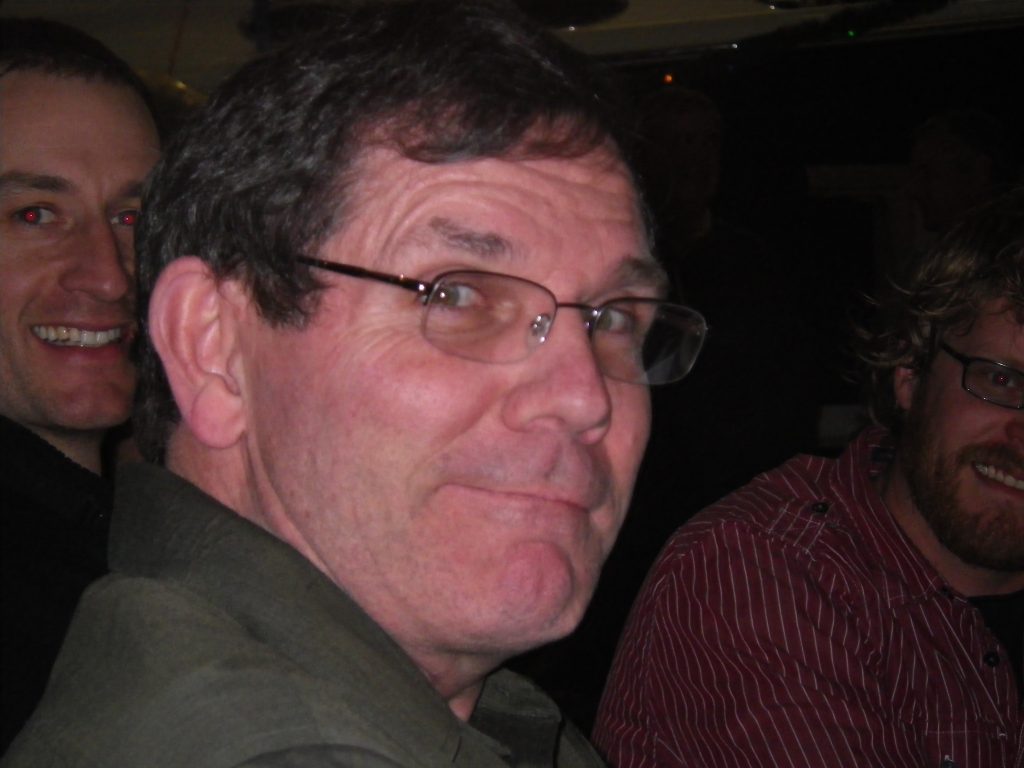 Guy came to Back Cove in 2006, beginning as a mechanic on the BC29 assembly line after a brief stint working at a local customer service call center. This move came after a successful career as a lobsterman, working the waters of MidCoast Maine. With Guy’s in-depth working knowledge of boats, ability to solve problems, and communicate effectively, it didn’t take long for him to create a home in customer service.

While we’ve learned so much through our dealer and owner communications over the years, there has been one common theme that we hear time and again; and that is how amazing, responsive, and helpful Guy has been. Often, one of the first questions we get when a Back Cove Owner arrives for a shop tour, is “Can we meet Guy? He’s helped us out so much and we’d love the opportunity to meet him.”

As some of you may not know, Guy has started down his much-deserved path toward retirement; he is reducing his schedule to three days per week, Monday through Wednesday. We have already bolstered our Customer Service capacity to continue the legacy that Guy has established during his exemplary career with Back Cove Yachts. So please join us in thanking Guy for all the work he’s done for Back Cove over the years, and also for continuing on a little while longer, so that your Back Cove is ready for that next voyage.

The Back Cove Team is excited to announce several interior design updates to the Back Cove 37. Check out the image captions for all the details, and keep an eye out for more photos on the way! 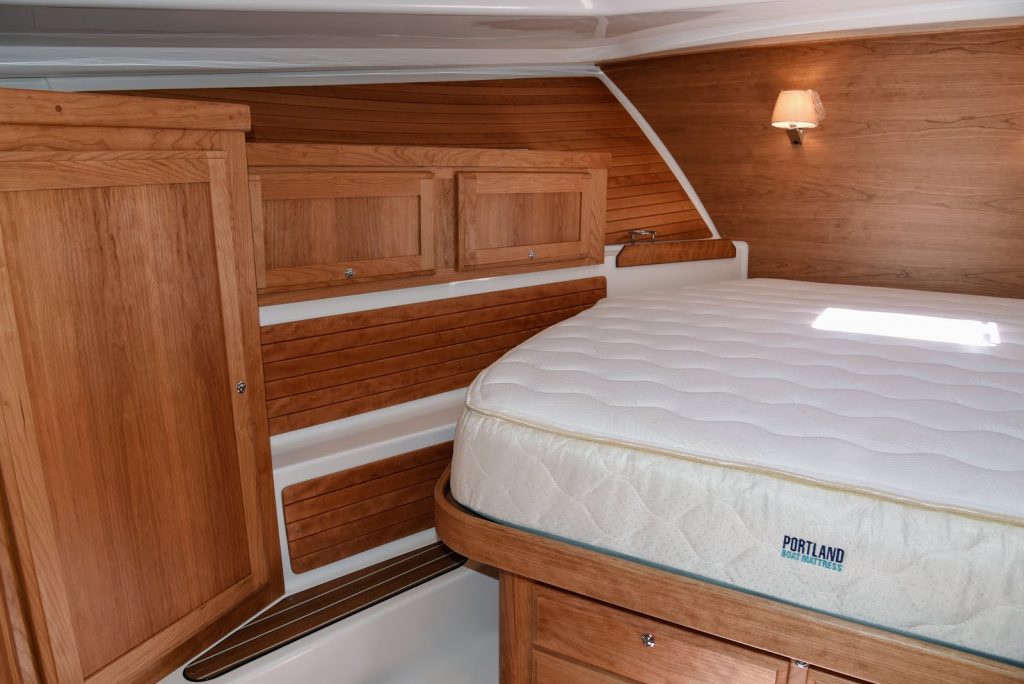 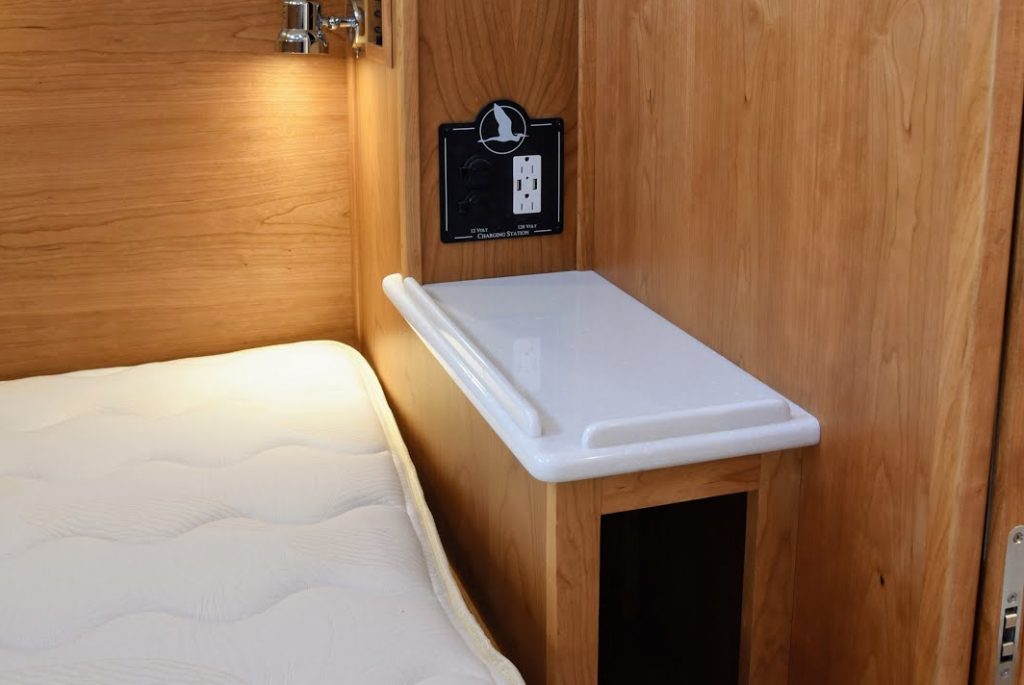 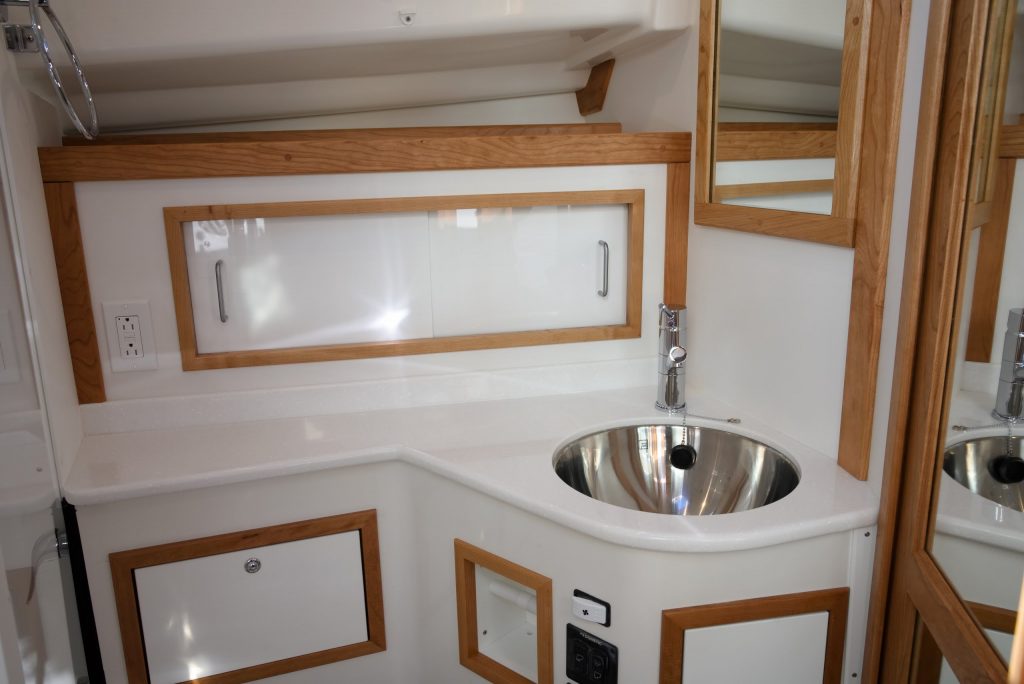 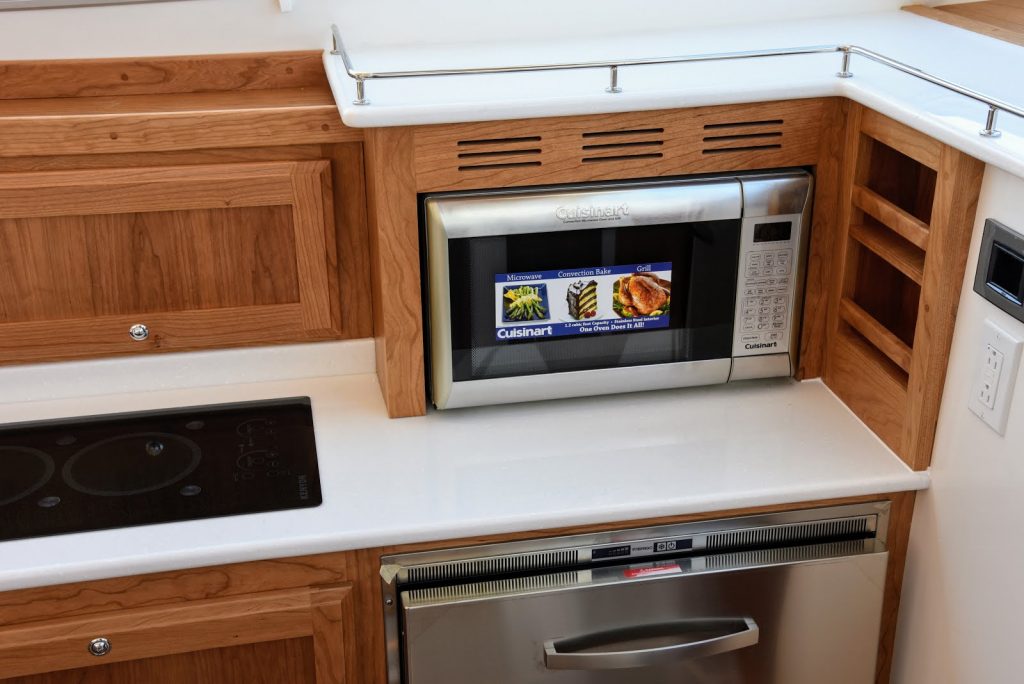 March 1st, 2018 seemed like a good time to check on Ellgi (pronounced LG), our BC 41 hull #4, in Bellingham, WA., of the Pacific Northwest. After a flight from our home base in California, we arrived in Bellingham; the sun was shining, winds were calm and made for a perfect day to get her prepped for the upcoming season. 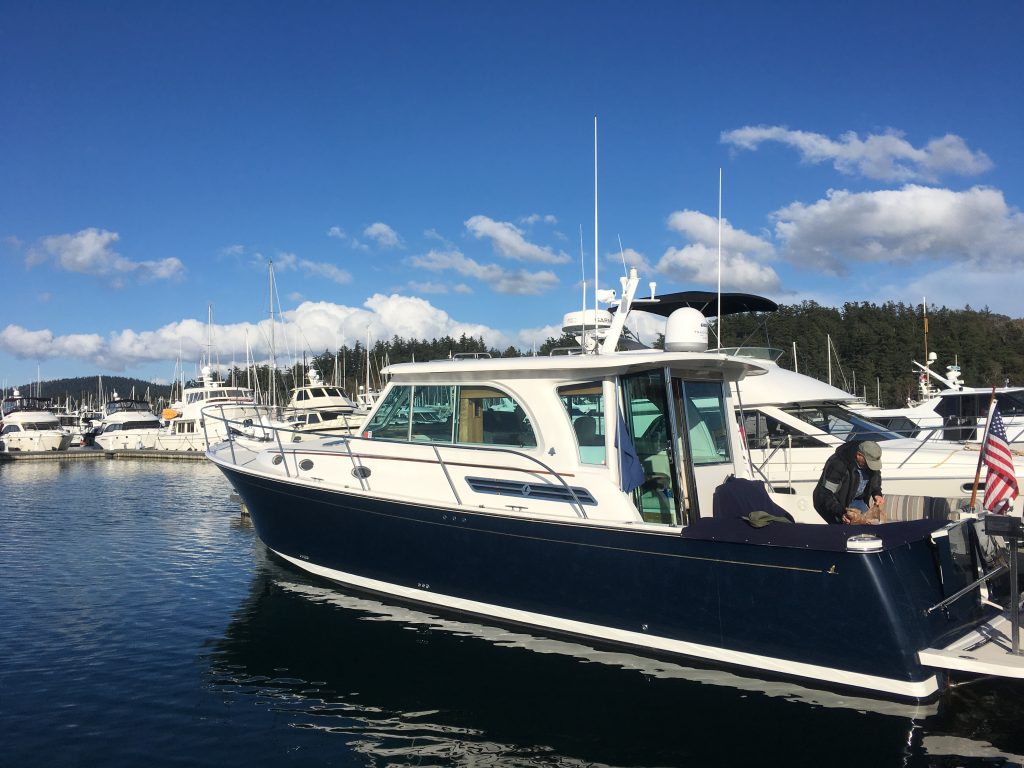 It seemed like a long time since we had last seen her in November of 2017 when we left her winterized and in the snow at the Bellingham docks. 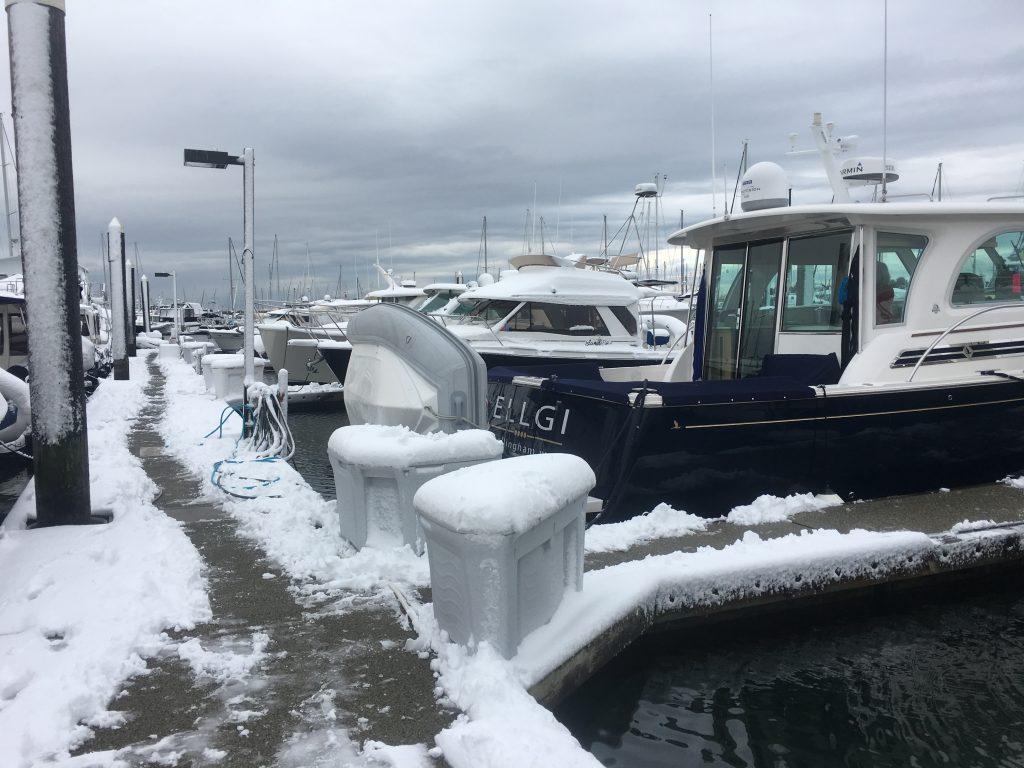 After 3 hours of checking her systems, DE-winterizing, and making her shine, we left the docks and headed to Anacortes, WA, for provisions to last us through a 6-day cruise of the San Juan Islands. The flat water could not have been better, the only ripples were from playful seals and boats checking their crab pots. 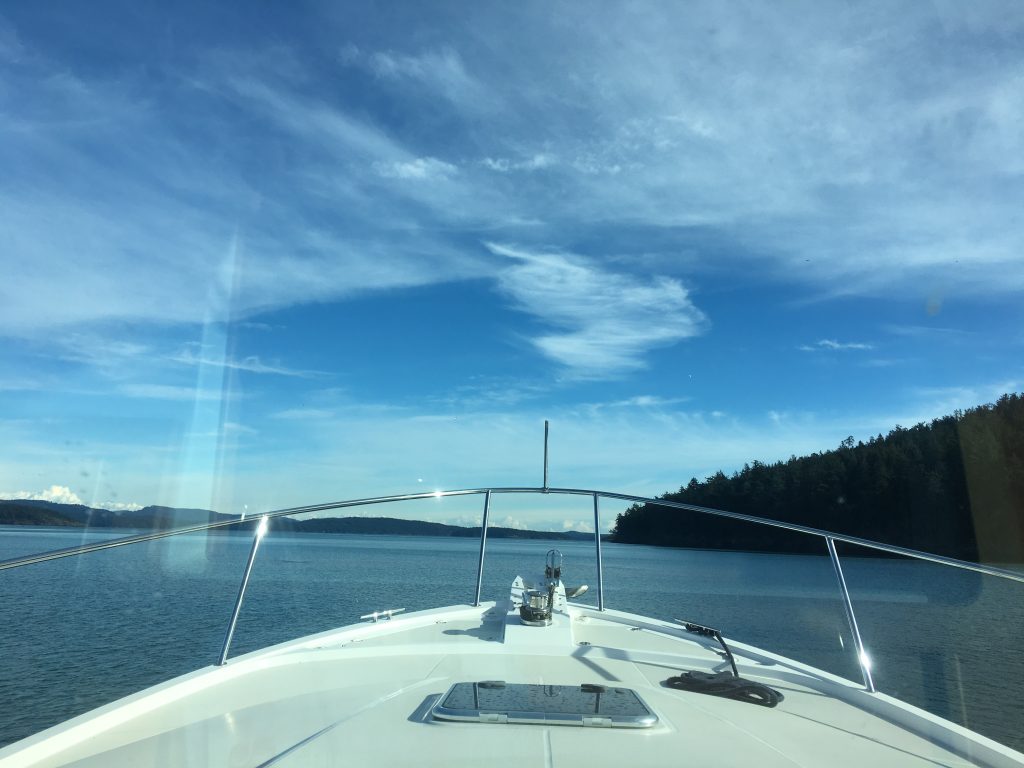 Checked the Marine Traffic app to see who else might be cruising in the area and found only a handful of boats out and about. I think everyone else was surprised the weather could be so great in early March. We spent several nights at Roche Harbor, which is one of the best harbors in the San Juan islands. 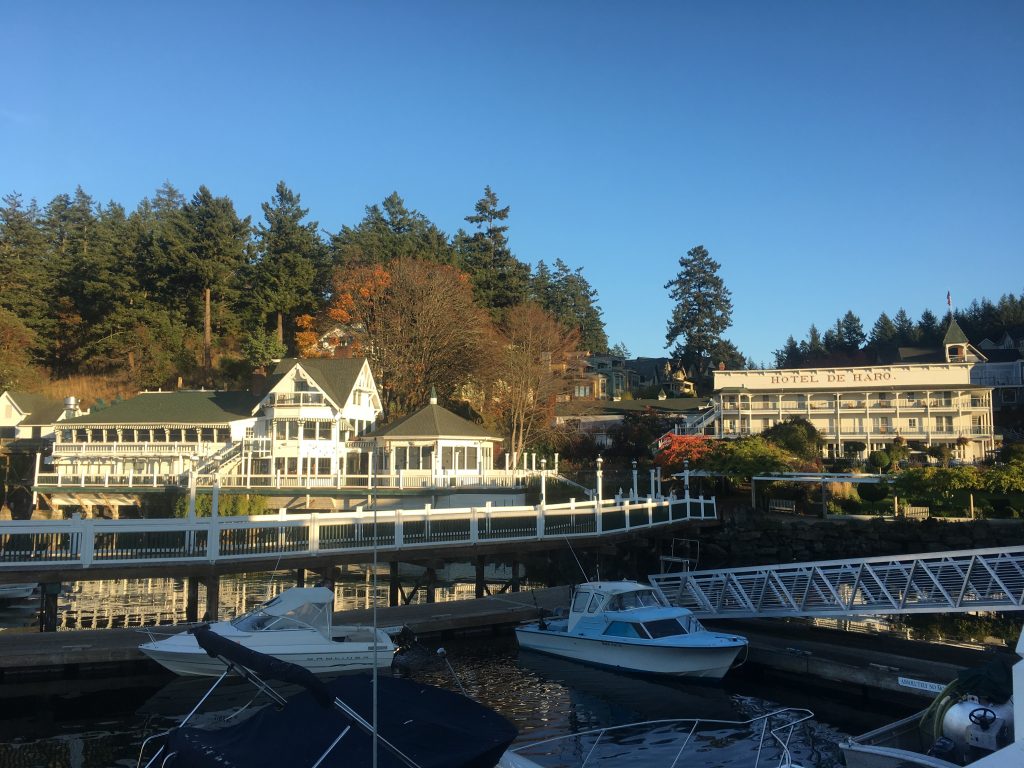 Sunsets at Roche Harbor are a sight to behold. They have a flag ceremony every evening from May to October as the sun sets. 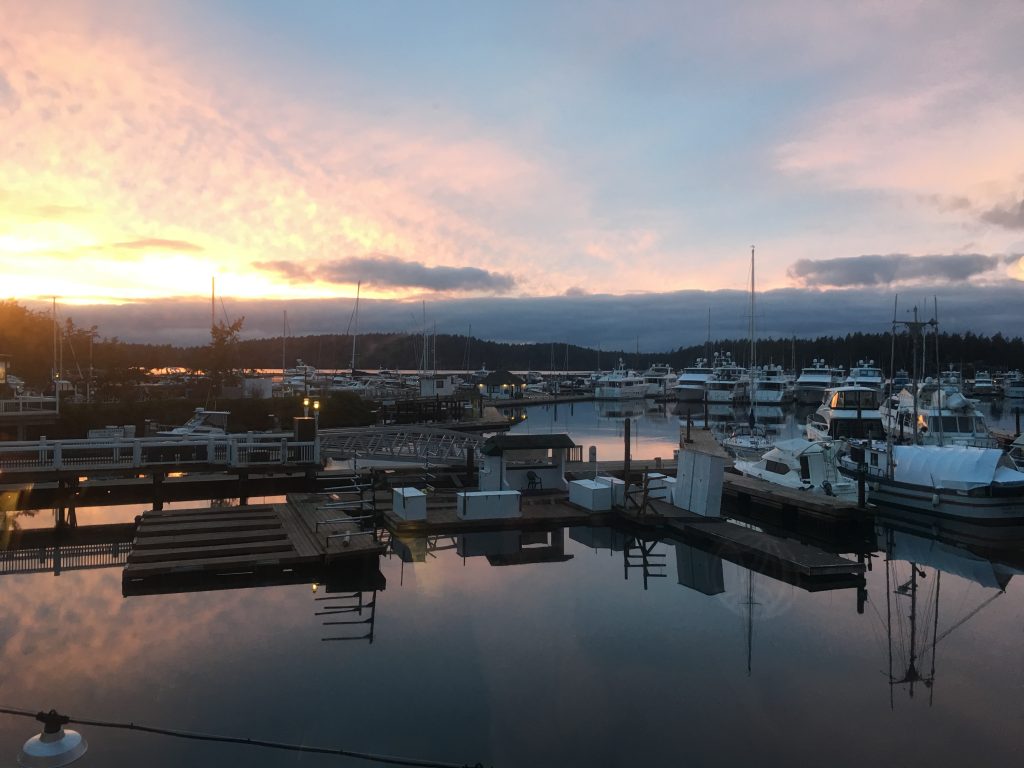 The cruise around the island of San Juan is worth the time – Mosquito Pass, Lime Kiln Light House, Cattle Point, Seal Rock, Bald Eagles, and on to Friday Harbor make for a special day cruise. 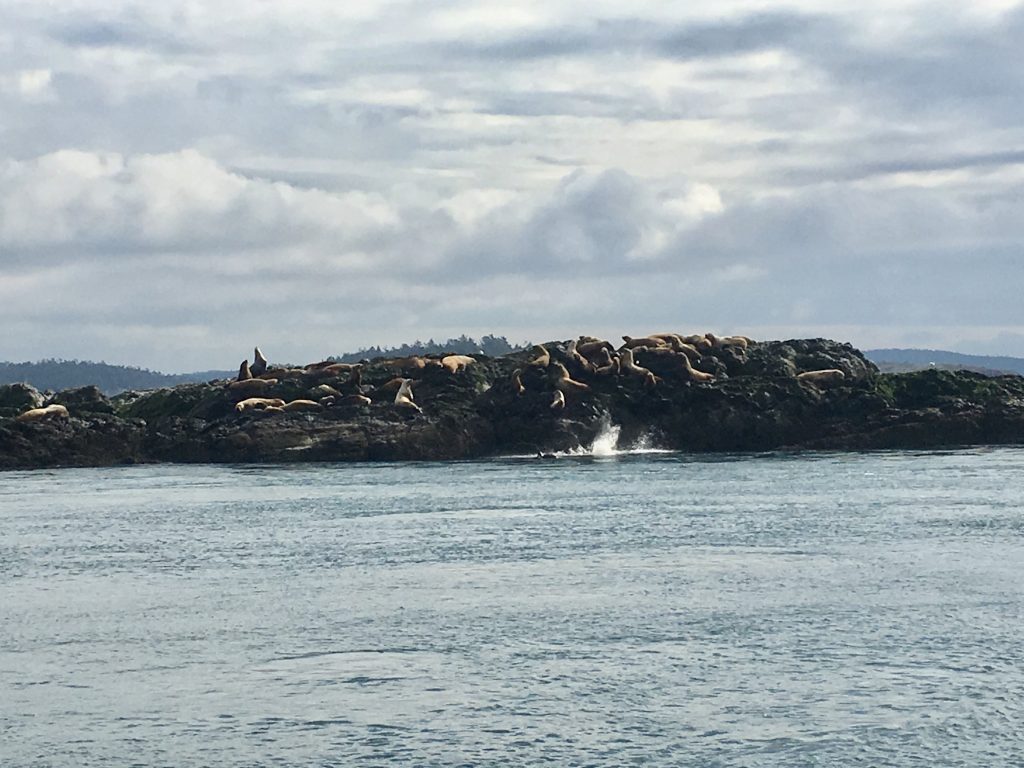 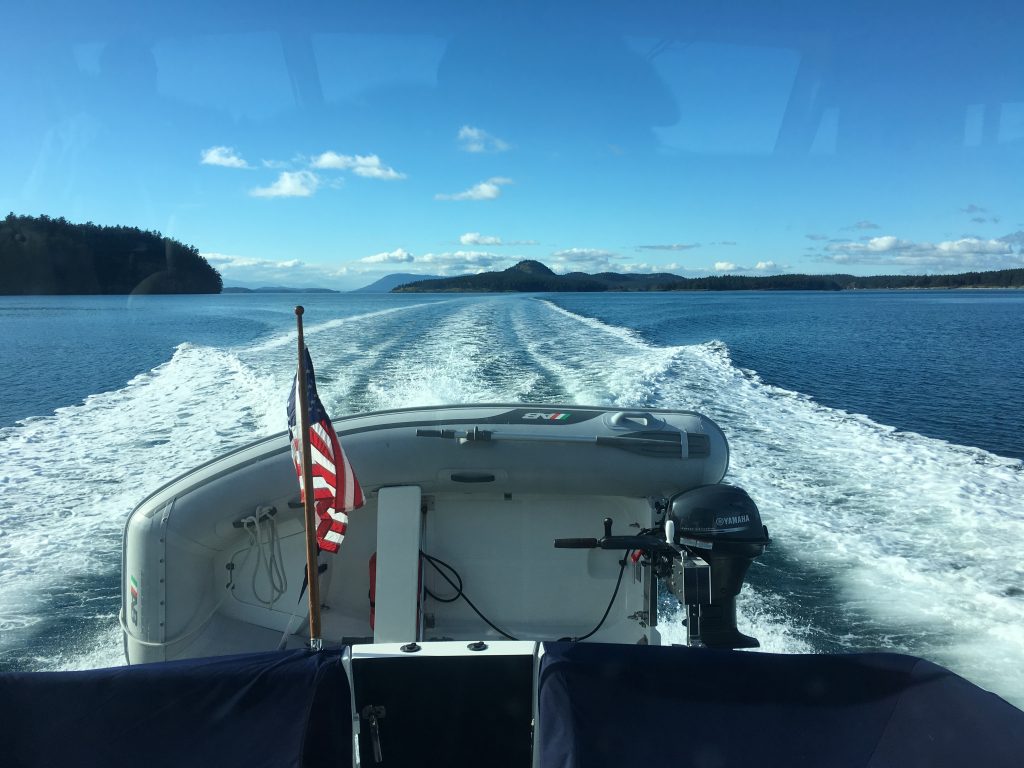 Next day we spent on Patos Island which is a small island just south of the Canadian border. There’s a great place to tie to a mooring ball called Active Cove, which has just enough room for two boats. This time of year we were the only ones on the island. A dingy ride to shore, a short walk to the Light House and then a nice driftwood bon fire made for an enjoyable island adventure. 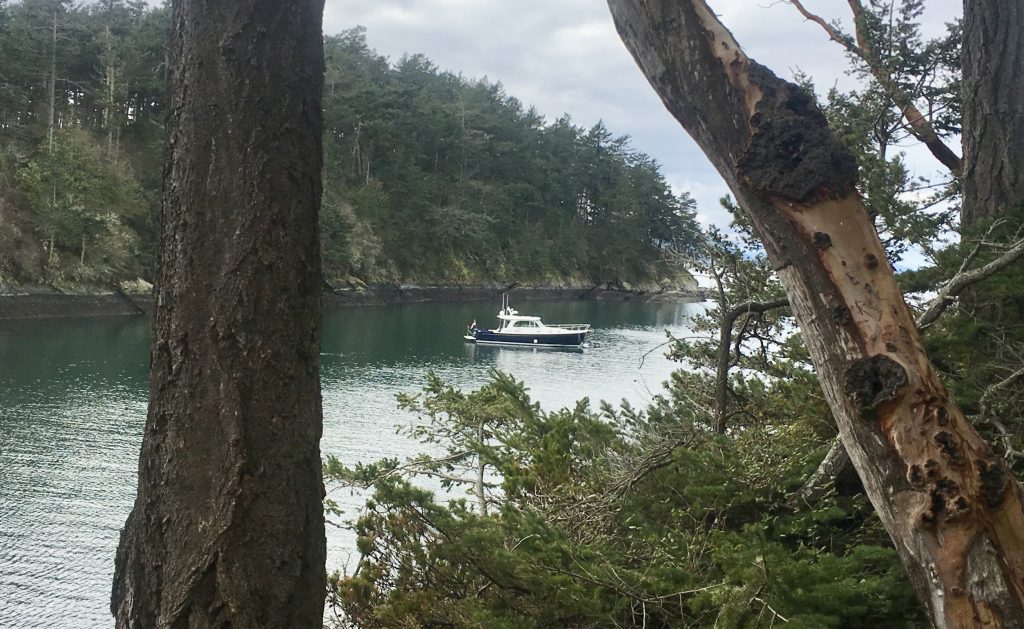 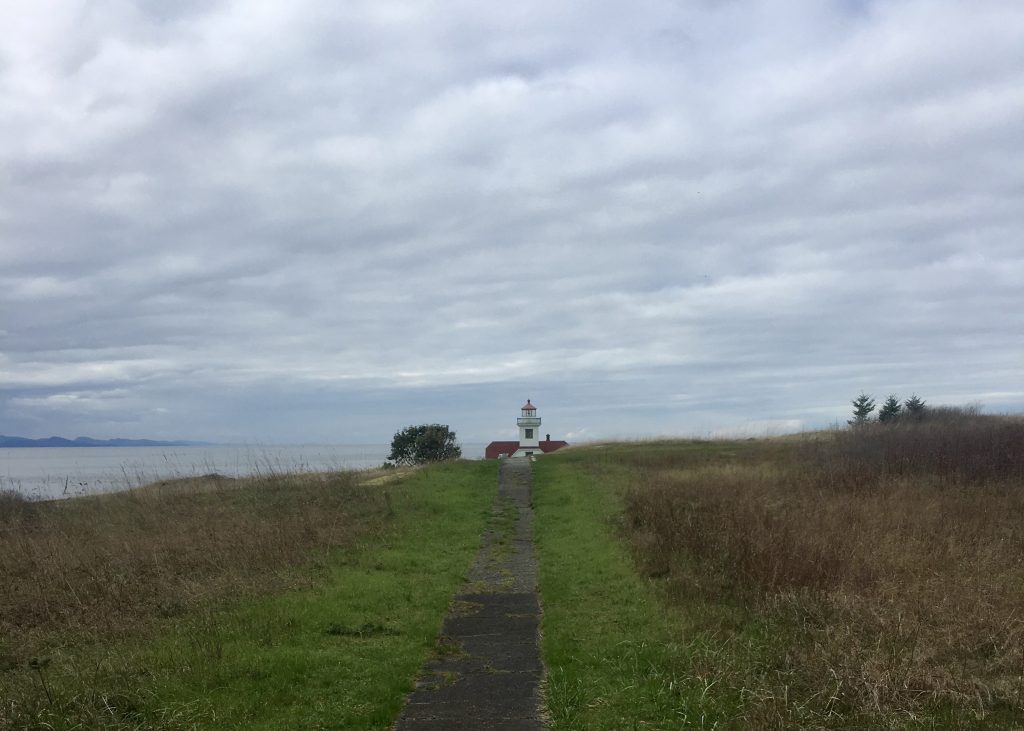 After six days in early March with mostly sunny skies and calm seas, it was time to head back to Bellingham. We cruised through Bellingham Bay with water like glass, then it was time to give Ellgi a bath, secure her to the dock, and say goodbye until we see her again in mid-April. We did have the reverse cycle heaters on for a warm  Galley, Salon, and Staterooms. 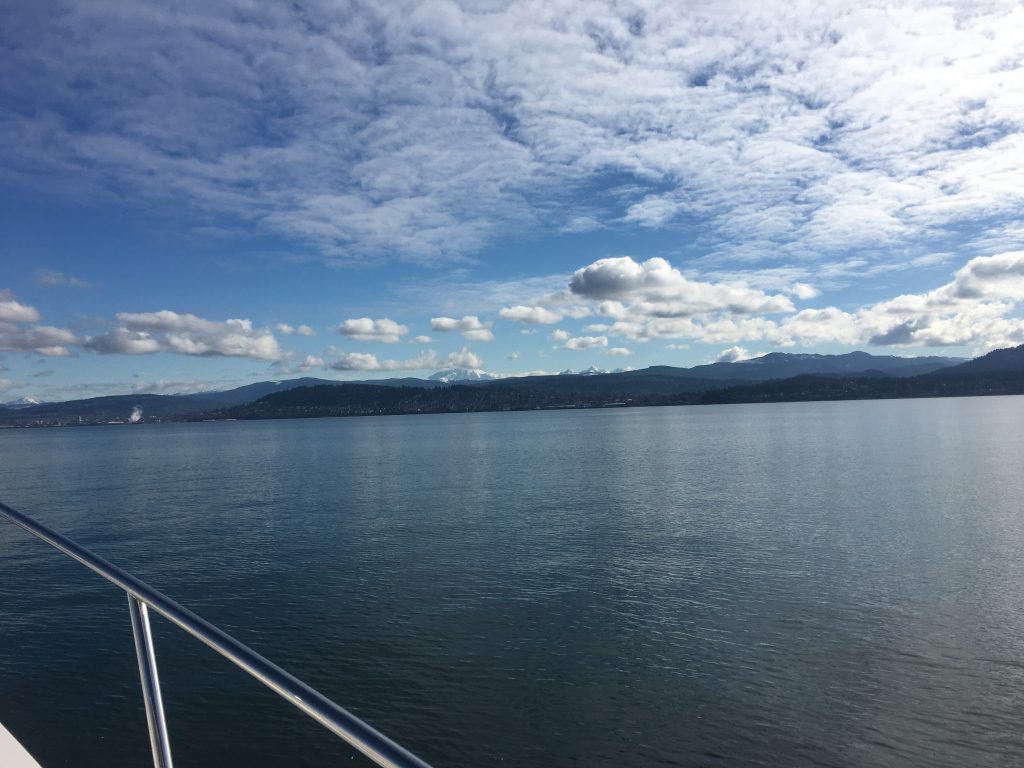 We hope to see you sometime in the Pacific Northwest cruising the San Juan’s, Canada and Alaska! 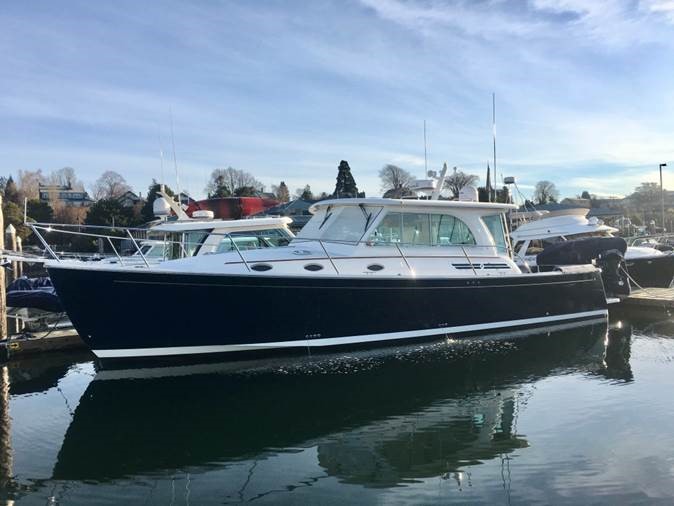 Production is underway on the first Back Cove 34O…

… and this is one build you don’t want to miss! Catch up on the latest news here, and join the 34O email list for exclusive info and updates 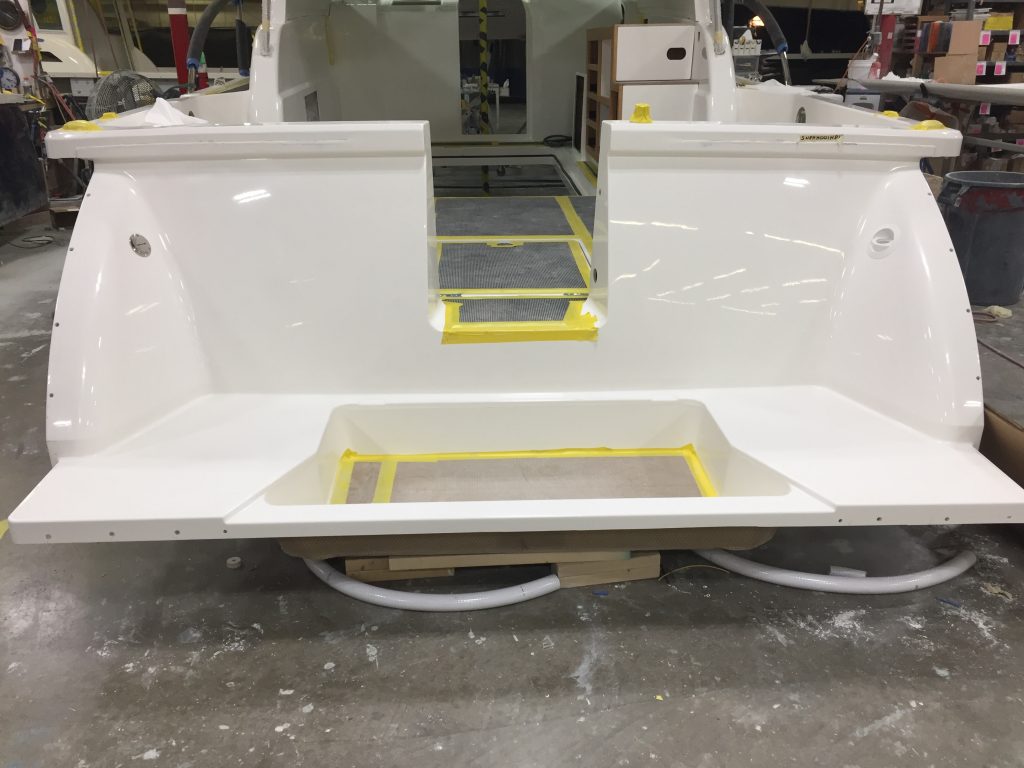 The swim platform remains spacious, and will become more so once swim steps are added around the “engine well.”

A centerline hatch will cover all rigging for the outboard motors, providing a clear and secure walking surface as well as convenient access. 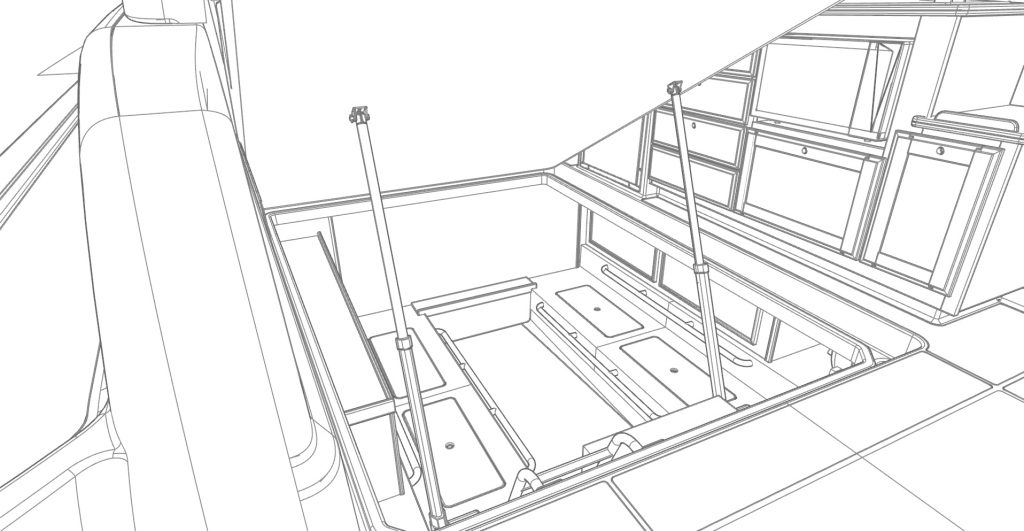 The 34O will feature incredible storage, accessed by a large hatch in the helm deck sole.

The jaw-dropping all-purpose area amounts to 38 square feet of clear space. (If that doesn’t sound like much, believe us, it is).

Posted in In the News | Comments Off on 34O Production Update

The first Back Cove with outboard engines features an entirely new hull design.

Kevin Burns, VP of Product Design & Development, explains the new features, and the power of computational fluid dynamics in the design process.

Posted in In the News | Comments Off on 34O Hull Design