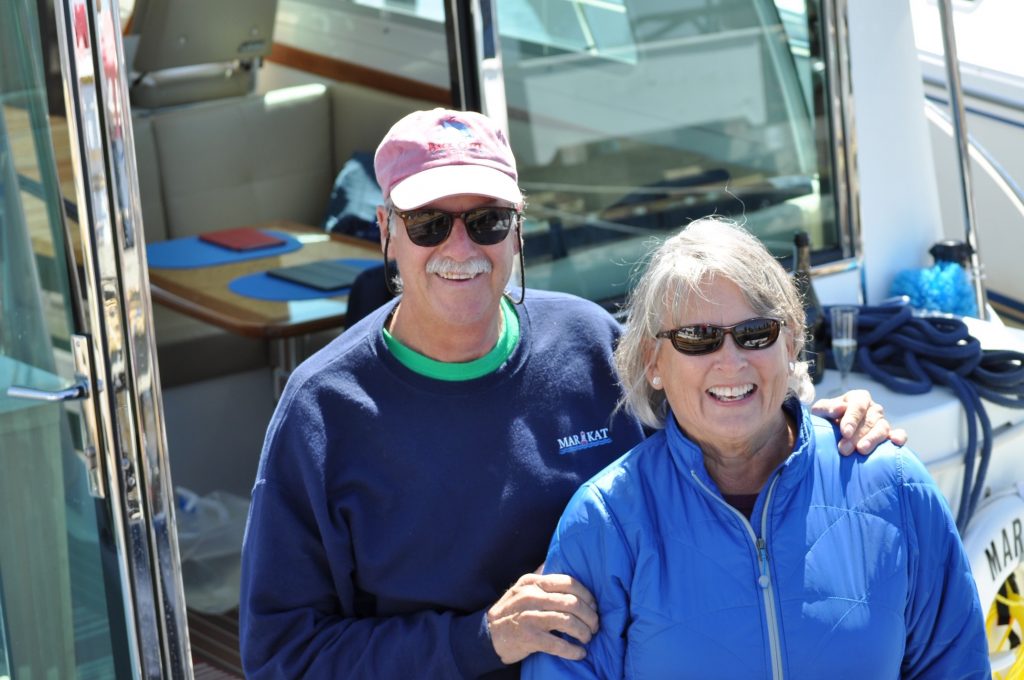 After purchasing our Back Cove 41, M/V MAR-KAT, in October 2016, we decided to make a shakedown cruise during the summer of 2017 to Maine and then on to Nova Scotia. The Back Cove 41 felt right at home in the Maine waters, and we had the opportunity to visit the factory for a tour.

Traveling to the more remote parts of Nova Scotia was a challenge and a thrill to see such a beautiful part of Canada. The 41 proved to be a very capable and reliable boat. Now, what will our next adventure be? We decided during the winter of 2018 to travel the Great Loop, a 6500-mile journey crossing 13 states and the Province of Ontario. The route basically circumnavigates the eastern part of the US. So we ordered charts, cruising guides and joined the AGLCA. How do we live in a space that is less than 400 square feet? We had to take with us everything that a homeowner would need to run a house, but in this case, the house is our new boat. We had to be organized, and everything had its dedicated spot.

On any given year there may be 300 to 400 boats making this trip. And since it is a loop, you can start anywhere, and most people travel the Loop in a counterclockwise direction to receive the benefit of the river currents. So off we go on June 15, 2018, leaving from the Albemarle Sound in North Carolina. After reaching Norfolk, the weather being good, we decided to go out to sea and run offshore to NY Harbor with one stop at Cape May.

We continued north on the Hudson River for about 155 miles. The scenery was stunning as we passed by the tall buildings of New York City. As we proceed northward, we noticed how the mountains came down steeply to the water’s edge. Further up the Hudson, we passed the US Military Academy at West Point and then on to Albany where we experienced our first big lock in Troy, NY. We decided to go west and enter the Erie Canal in Waterford, continuing on to Oswego, which is on Lake Ontario. The Erie Canal was a scenic cruise through the farmlands of New York. So far we have transited 30 locks. The Erie Canal was completed in 1825, and we were able to experience the many towns along the way and tie up at town docks. This part of the journey was very peaceful and relaxing since we did not have to worry about tides and currents,

Entering Lake Ontario, we noticed the geology change greatly as the soft bottoms of the rivers have been replaced by granite of the Canadian Shield. It was in Oswego we had to make a choice of going straight across to Kingston, Ontario or continue east down the St Lawrence River to Alexandria Bay in the Thousand Islands. And there really are 1,000 islands. If it is large enough to stick out of the water and has at least one tree, it is considered an island. This is where the famous Boldt Castle is located.
There are endless beautiful anchorages among these many islands. It was here in Gananoque, Ontario we decided to enter Canada, clear customs and hoist our Canadian courtesy flag. 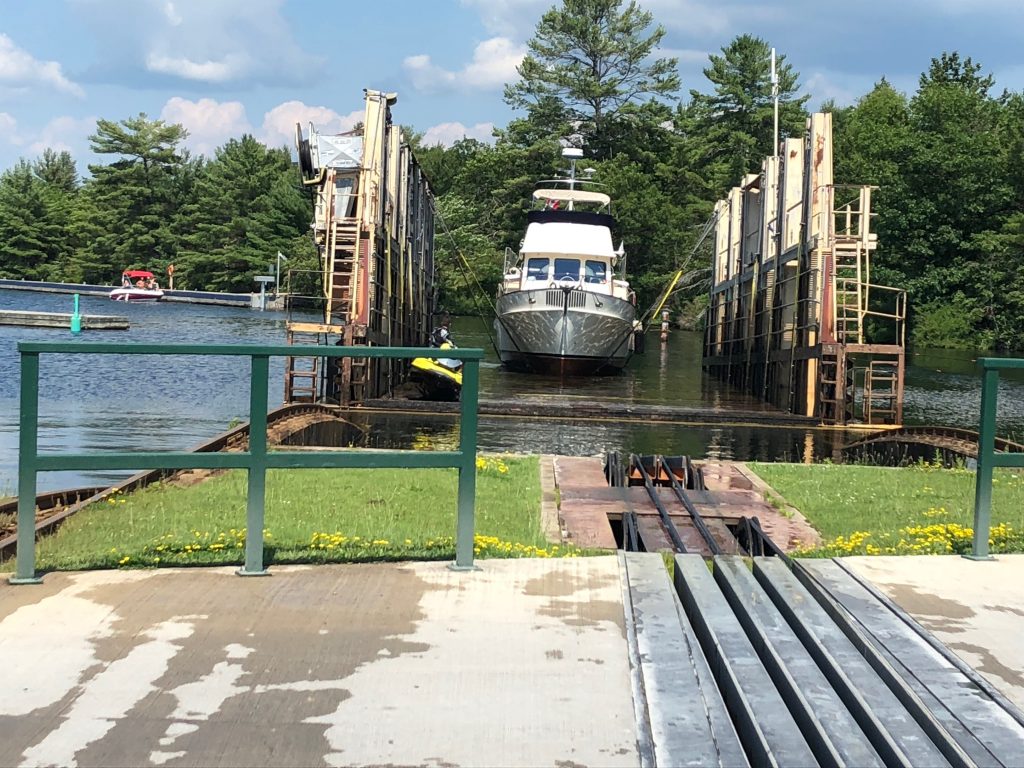 From the Thousand Islands, we traveled westward for two months on our way to the Georgian Bay and Lake Huron. As we went the scenery got more spectacular with the many species of pine trees growing between the rocks down to the shoreline. In Trenton, we entered The Trent-Severn Waterway and negotiated the 41 locks and 240 miles on the waterway. Most of the locks are still hand-operated, and there are many rivers and lakes that interconnect the waterway. There are two unusual locks we encountered. One is a hydraulic lift lock where the boats are secured in a tub of water on the upper side, and an identical tub on the lower side and the boats ride up like an elevator. The other unusual lock is the Big Chute Railway that takes the boat completely out of the water on a carriage that travels overland to the other side.

After exiting the Trent-Severn Waterway, we entered the Georgian Bay. We decided to explore the Bruce Peninsula’s eastern shore. There were many remarkable anchorages we visited. In most cases, we were the only boat staying the night. Wingfield anchorage was one of our favorites. When we reached Tobermory at the north end of the Penninsula, we steered an easterly course to the Bustard Islands about 50 NM across the Georgian Bay. These are a small grouping of islands composed of mostly granite rocks and pine trees coming down to the water’s edge. The inflatable dinghy was a great way to explore the islands and also try some fishing.

Next, we traveled through Collin’s Inlet with a stop for a few nights at the Sportsman’s Inn in Killarney on our way to the North Channel. One thing that surprised me was how clear the water was. You can see at least 20 feet down. So checking the anchor for a good set was easy. The North Channel was probably the most beautiful place on the whole trip with endless anchoring possibilities and a few small towns along the way to get provisions and top off the water tanks. Baie Fine is a not to be missed destination up a 10-mile fjord to a popular anchoring spot called the Pool. The Pool is the only place on the trip that had neither cell service nor TV reception. Definitely, this is a place where you can disconnect. 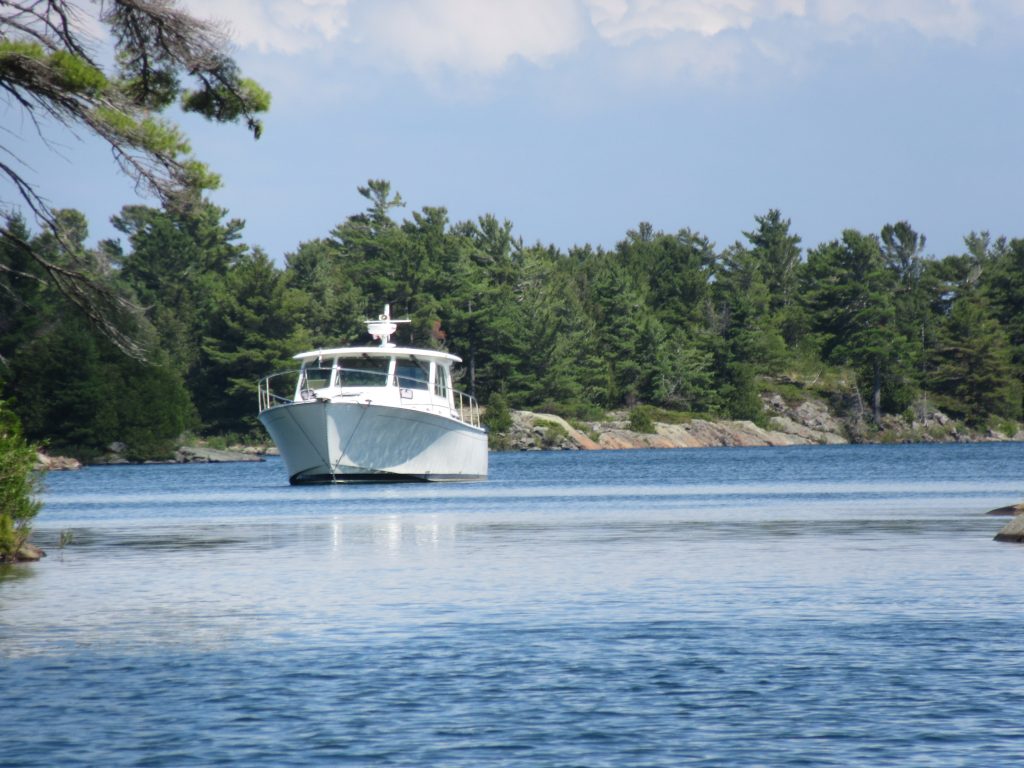 MAR-KAT anchored at the Bustard Islands

At the western end of the North Channel, we re-entered the US at De Tour Village in Michigan. The new Customs and Border Patrol app for the smartphone made clearing customs easy. From there, we decided to take a step back in time and spend a few nights on Mackinac Island. To this day, cars are not allowed on the island, so all transportation is accomplished by horse and wagon and bicycle. It was truly a wonderful experience. At this point, we had to decide which coastline of Lake Michigan to travel the 300 NM south towards Chicago. We decided to go down the Michigan side. There were many harbors of refuge about 50 miles apart. It took us about ten days to get to Chicago on account of 8 to 10-foot seas in the lake. It was great the Back Cove 41 has the speed to travel longer distances in a shorter time. We arrived in Chicago for Labor Day and some sightseeing. The deep-dish pizza and the architecture tour were fabulous.

Our next experience after leaving Chicago was navigating about 1,000 NM of the various rivers to Mobile Bay and back to the salt water in the Gulf of Mexico. The rivers down to Mobile are used primarily for commercial tows and barges, many of which push 40 to 50 barges at a time. We realized that the rivers belonged to them, and we are just sharing the river with them; we got along fine. AIS was most helpful at spotting the tows ahead of time so that we could make passing arrangements. From Chicago, it was 300 NM to the Mississippi River, and that is where the fun began. The river was up about 25 feet with a current of 4 to 5 knots. Buoys were being sucked under, and in some instances, on the Ohio River, we actually went over the dams, so we did not need to use the locks going upstream to Paducah, KY. We needed a few days rest in Paducah after traveling the “wild river” and fortunately did not hit any floating logs. The remaining rivers being the Cumberland, Tennessee and the Tenn-Tom canal completes the trip to the Gulf of Mexico. These rivers were much more tame and beautiful than the trip down from Chicago. We met up with many other “Loopers” on the river systems, and we tended to travel together for days at a time. 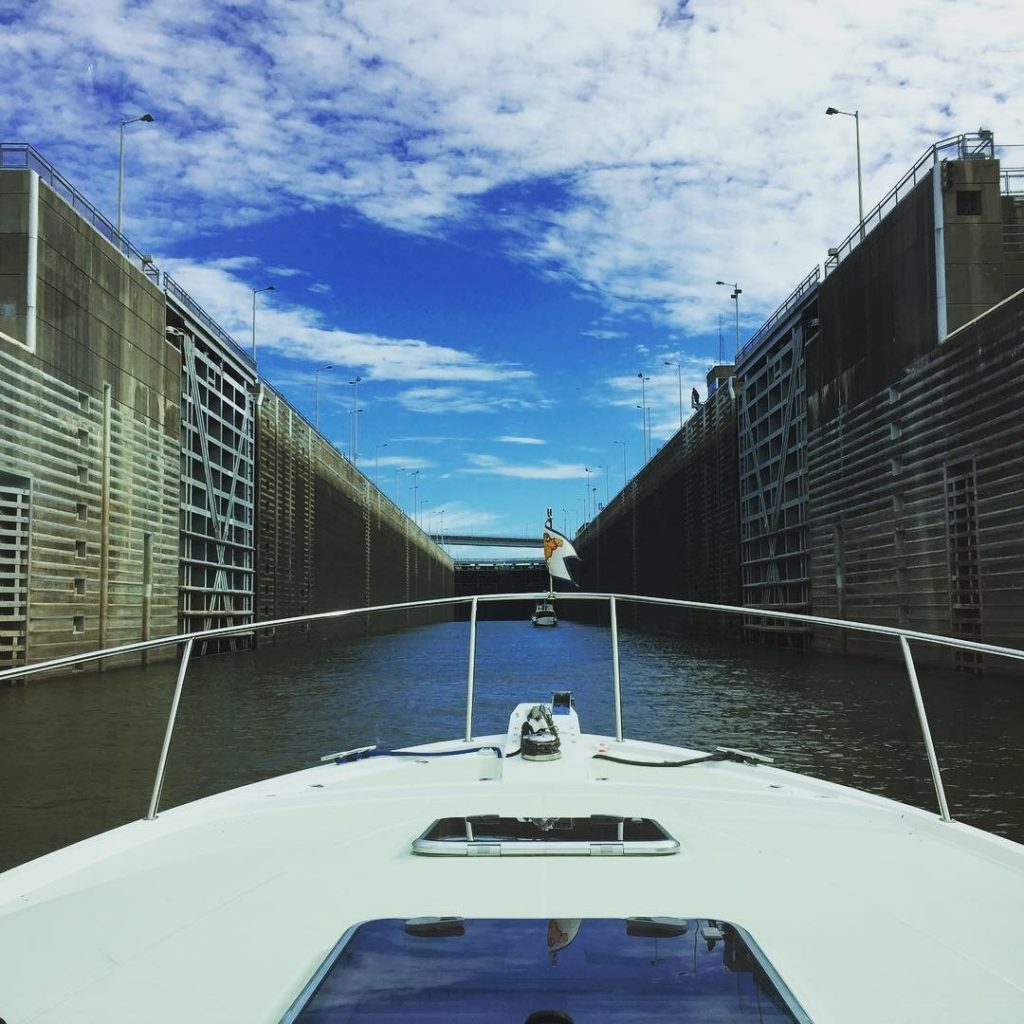 Lock on the Tennessee River

Once in the Gulf of Mexico, we were rewarded with the warm weather we had been looking forward to. It was getting close to Thanksgiving, and our goal was to be in Fort Myers and find a turkey to cook. It was sad to cruise through the hurricane damage around the panhandle of Florida, which occurred just months before. Our plan was to get to Key West by mid-December, so we had plenty of time to visit the towns along the west coast of Florida. We spent a month in Key West. What a fun place with great restaurants and historical places of interest. In Marathon, there was the Turtle Hospital and the Dolphin Research Center, which are very important for the rehabilitation of these beautiful animals that get entangled in man-made plastics and fishing gear.

After spending about two months in the keys, it was time to head north since we had been gone for almost nine months. There were still many great anchorages and towns we visited on the east coast. A few of the most fun places were St Augustine, Savannah, Charleston, and St Simons Island. There were great food tours in St Augustine and also Savannah. Our pace returning home in North Carolina was somewhat leisurely since we wanted to arrive back home with the warm spring weather. We arrived back home on March 27, 2019, after an amazing 10-month journey. We had so many great experiences, and the fellow boaters doing the loop were great to travel with.

The Back Cove 41 was the ideal boat for this trip. It was a perfect size and could fit under most bridges along the way. We put close to 500 hours on the boat, and the only maintenance required was a few oil changes.

We now look forward to our next adventure.
– Amy and Bill
Back Cove 41, MAR-KAT

This entry was posted in Back Cove Family, Back Cove Yachts Blog. Bookmark the permalink.